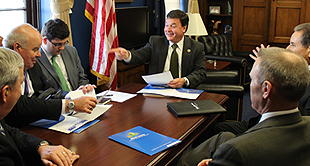 Miami County IN: The Miami County Economic Development Authority (MCEDA) announced today the formation of a new subcommittee, which will focus on defense growth and expansion in North Central Indiana. The subcommittee, referred to as the Grissom Regional Defense Alliance (GRDA) was formed in cooperation and partnership with the Grissom Community Council. Volunteer members of the Community Council, from the participating counties of Cass, Howard, Miami, and Wabash, along with Board members of the Economic Development Authority comprise the Alliance.

As previously mentioned, the Alliance will focus on growth and expansion of the defense industry throughout North Central Indiana to include Grissom ARB, Grissom Aeroplex, or elsewhere in the region. The Alliance has established four (4) focal point areas to achieve its goals and strategies.   These areas include;

A major effort is currently underway within the strategy of growing the military’s presence at Grissom ARB. The 434th Air Refueling Wing is currently under consideration, as one (1) of eighteen (18) total Air Force Reserve bases, for the new KC-46A aircraft refueling tanker. The new KC-46A tanker is a little larger, more powerful, and more efficient than the 50 year old KC- 135, thus providing more refueling capability. This process to select the first Reserve base is very competitive. The process not only involves the physical capacity of the base to meet the requirements of the new aircraft, i.e., runway size, aircraft parking ramp space, etc., but the cooperation and partnership of the community to help support the new aircraft and increased personnel. The Alliance believes that the new squadron of KC- 46A aircraft will also include an active associate squadron of aircrew, maintenance, and support personnel coming to Grissom ARB.   This active associate squadron will be “active duty” personnel working side by side and flying the same aircraft as our current Reservists.

The Alliance has been in conversations and meetings with several State agencies, to include the Lt Governor’s office, the Indiana Office of Defense Development (IODD), and the Office of Community and Rural Affairs (OCRA). . These meetings have been extremely successful in building momentum and support for the KC-46A aircraft as well as other defense objectives and initiatives of the Alliance.   Members of the Alliance will also be traveling to Washington DC on March 16th and 17th to meet with our Indiana Congressional Delegation on Grissom’s advantages for the KC-46A as well as other goals and strategies of the Alliance.

Grissom Air Reserve Base and outside the Base at the Grissom Aeroplex, as well as throughout the region of North Central Indiana.